“See these sneakers in the closet? They are my favorite, but we share them with several people. I hope to have them tomorrow for the Lesvos track and maybe even for Paris!” Faded pink, frayed tips, floppy soles, the sneakers mirrored by Mahmood Alizada have come a long way. Kind of like the 18 year old.

The odyssey that brought him here marked his body and mind. Left from Afghanistan, the young man with the smiling eyes traverses Iran and, though small, worked in the textile mills of Turkey before reaching Greece three years ago. Faced with extremely precarious living conditions, Mahmood Alizada made walking his compass. The Yoga and Sport With Refugees association, which offers physical activities to refugees, accompanies him on the island of Lesbos (Greece). On Saturday June 15, she opened a relay of her activities in Paris and has the ambition to help her with the Olympic refugee team in 2024.

The pines cast their dancing shadows on the road leading to Mitilene, the capital of Lesvos. The last rays of the sun caress an azure sea† A landscape that has become the daily life of Mahmood Alizada for 10km, 20km or 40km runs.

†It is both the most beautiful island and the most terrible“explains the 18-year-old young man, with a slender figure. Below, the white tents of the Mavrovouni camp are scattered in tight rows behind fences and barbed wire. USAHastily built on a former army fire pit, after the Moria camp went up in flames, they house thethe families who come mainly from Afghanistan, Congo, Eritrea or Sierra Leone.

“Many migrants tell us that they had two alternatives to survive in these extreme conditions: sports or drugs”explains the French Estelle Jean, co-founder of Yoga and Sport at Refugee, an association that supports migrants in their sport.

“When I arrived I was boxing, but I didn’t like kicking. I couldn’t sleep, I had nightmares. The doctor told me to stop.” Running then became his escape. Also a remedy for boredom. “When I run, I’m happy. After 25 km I don’t think about anything anymore. It brings me a lot of peace, it calms my mind.”

Gifted, the young man began to dream of Olympics. The one called “Mahmood Good Mood”, because of his communicative good mood, quickly became one of the pillars of the association. “I was training a lot, so I got the offer to become a coach, I’m very proud of that”explains the interested person in shorts with fluorescent flowers. “We quickly saw that Mahmood was really good at big distances and he can do something with it. We’re trying to push him so he can reach the level he dreams of.” explains Estelle Jean.

“To be at the Olympics with yoga and sports would be incredible. To show people that we come from here, from Lesvos, with our stories. To be happy and proud.”

Like Mahmood, several runaway athletes show great promise. The idea of ​​continuing to accompany them, once their papers were obtained, gradually took root. “Lhere is both a strong demand from refugees, but above all we have the prospect of Olympic Games in 2024. It is a dream for which we allow ourselves to create this new adventure in Paris at the end of June”, gets excited Estelle Johannes. An important investment for the small association that dreams big.

In the gym of yoga and sport with refugees, lThe bodybuilding class is in full swing. The sound system broadcasts a mix of Afghan music and reggaeton remixes at full speed. While you wait to end your sheathing session, Mahmood Alizada cares carefully equipment† Swimming goggles, shorts, sneakers, boxing mats and sportswear are stored in large closets. “Migrants have often left everything behind. They have to be rested from head to toe”, explains Madeleine, a French volunteer who works at the reception†

The material difficulties, the insecurity of the athletes and the hostility of the Greek government represent so many daily challenges. “With repeated quarantines in Greece, the camp was almost cordoned off by the police. Migrants were only allowed out once a week, for a maximum of four hours. We gave all the equipment we could so they can continue exercising indoors,” adds Estelle Jean† The young Afghan, who lived in Mavrovouni before going to a center for minors, recalls: “I jumped the barrier and the barbed wire to start running. Luckily I ran fast, the police couldn’t catch up with me. It was a difficult time.”

“You wait for papers that give you a life, it is something that drives you to despair. Sport brings resistance and freedom. Without it many would go crazy, spinning in the camp from morning to night, until you lose yourself .”

Estelle Jean, co-founder of Yoga and Sport With Refugees

At the age of 18, Mahmood Alizada joined the “house of carriages”, so as not to find the camp tents. The accommodation, in the center of Mytilini, is at the disposal of the coaches of the association. this last one if there pass six months, one year, three years, to get their papers. The only decoration on these bare walls: trophies and medals, proudly displayed.

In a few weeks, the young man in turn will leave the island. Mahmood has just come of age and has just received his papers. A destination is essential: France, where the young runner will submit his asylum application. the process, long and difficult, necessarily parasitic in thetraining of a top athlete. †I’m not afraid to sleep on the streets in France, to have to start all over again. I just want to keep running, learn French, work and help the association.” the young man replies. As a farewell, he registered for one last race. His way of projecting himself onto Paris.

A few minutes before the start, Mahmood Alizada patiently puts on his favorite sneakers, finely negotiated while distributing the equipment. Ten participants of Yoga and Sport With Refugees and about fifteen supporters made the trip to Petra, in west island†

At the start, the young man didn’t hesitate long before taking the lead and gobbling up the miles between the olive trees. “It happened that there were no Greeks on the podiums. Only refugees from Yoga and Sport. In their minds there is no possible defeat. They will go for it 100% and give everything until ‘the end of the competition, even if they are less educated”smiles Estelle John, an association t-shirt on the shoulders.

But on arrival, the sportsman grin: “I had to stop because of pain Knee. I finish third, that’s good, mas sIf I ever want to compete in the Games, I’ll have to walk more than 36 km without pain.” he explains to the applause of his team before letting go in a shout of joy: “The next one will be in Paris!” 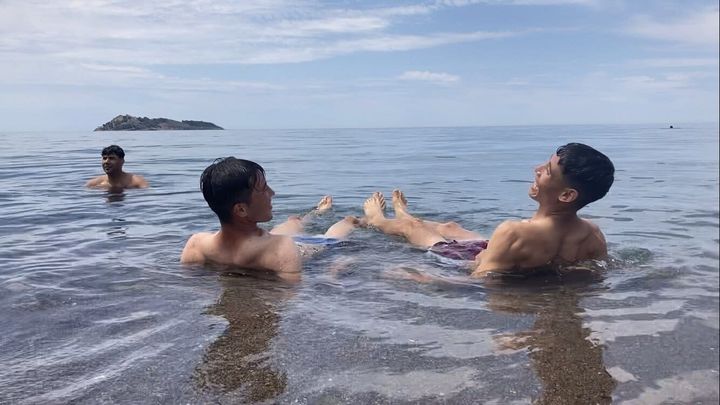 After the race, volunteers and athletes take a short breather in the crystal clear waters. Like a stomp to the same Mediterranean they once crossed. Sitting in the water, Mahmood Alizada imagines his new life. He has already planned to hold a race in Brittany in early July, “to keep up with the pace”†† He won’t have this time his favorite sneakers. Does not matter : “At Yoga and Sport with Refugees they are going to make other people happy. With or without shoes, I will do everything I can to make my Olympic dream come true.”